HAGERSTOWN, Maryland – In the minute after hijacked Flight 11 crashes into the North Tower of the World Trade Center, firefighters from the Fire Department City of New York began responding to an incident that would forever change their lives and the lives of most Americans.

8:46 a.m. Flight 11 crashes into the North Tower of the World Trade Center.

Deanna Pelton, a career firefighter and paramedic with the Hagerstown Fire Department, then a member of the Maugansville-Goodwill Volunteer Fire Department, recalls being in the house of a patient with a medical emergency and watching as the second plane crash into the World Trade Center.

“We all froze at the moment and I thought about all the responders that would be going in to the building,” Pelton said.

The FDNY communication’s center, known as “Manhattan,” normally a busy hub for fire department operations, was overwhelmed with calls on Sept. 11, 2001. The center later published hours of chilling radio transmissions between the center and firefighters on the grounds at The World Trade Centers. Some of these transmissions are the last words spoken by the 343 firefighters who died to save others.

“Battalion 1 to Manhattan…a plane as crashed into the upper floors of the World Trade Center,” said a FDNY battalion chief who was blocks away on a separate incident the morning of Sept. 11.

“Send every available ambulance…everything you got to the World Trade Center now,”

a frantic firefighter from FDNY’s E10 said over the radio.

“Mayday! Mayday! Another plane has hit the second tower,” a firefighter inside the North Tower said frantically.

With the vast array of fire department units responding on the incident, many saw the second plane hit the South Tower, but that didn’t stop or sway them from their assignment and oath…to protect the citizens of New York.

9:37 a.m. Flight 77 crashes into the western façade of the Pentagon.

9:59 a.m. The South Tower of the World Trade Center collapses.

“We had returned from the call and were sitting around the station watching the news broadcast and as we were sitting there we saw the (South Tower) start to crumble,” Pelton said. “…All those people still inside the building and within seconds were in the crumbled mess. A very gut wrenching feeling.”

With news of the crashes in New York and Washington D.C., some passengers aboard Flight 93 were able to make phone calls and leave voice messages with family. These passengers said that their plane had also been hijacked and they were going to attempt to take control of the plane.

10:28 a.m. The North Tower of the World Trade Center collapses.

“If I could send a message to the responders present on Sept. 11, 2001, I would thank them for their bravery,” Pelton said. “I would thank their families for the sacrifice that they gave that day.”

Bodies of some firefighters were never recovered from the mangled steel and broken concrete.

“Some of the family members weren’t able to see their loved one at some type of viewing or funeral because their bodies were lost in the rubble,” Pelton said.

In the audio recordings you hear dispatchers repeat numerous times, “standby unless urgent,” a phrase that applies to radio communication. Pelton said that at the time, likely every message was urgent, but some messages didn’t make it through because of communication failures. 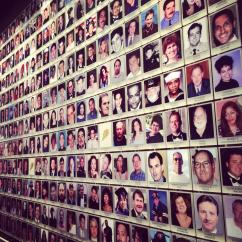 The firefighters, EMTs and paramedics that died on Sept. 11 couldn’t stand by. They were risking their lives to help strangers…strangers that went home to their families. As for the 343 FDNY firefighters, 23 NYPD and 37 Port Authority Police, we salute you for your bravery, dedication and courage.

2 thoughts on ““Standby unless urgent,””